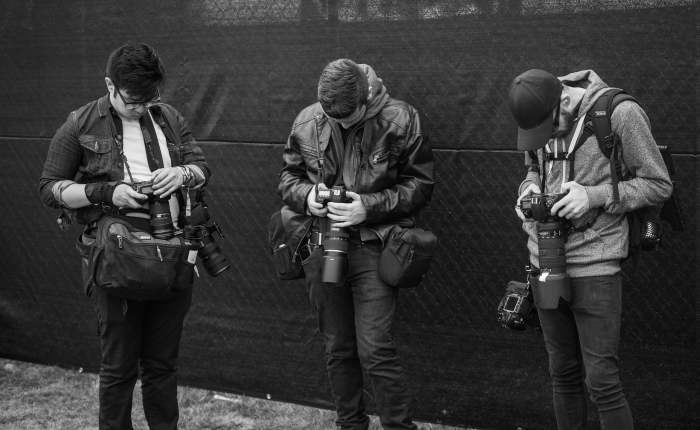 It happens to all of us, more than we would probably like it to. You get an assignment with a brief description of the subject, sometimes it’s a person, place or event. Maybe you’ve already started visualizing the shot you want in your head, or maybe thats not your style. Either way, at some point in the assignment, wether its the moment you arrive, while you’re there or right as you’re leaving, you see the shot happen in front of you (or off to the side or somewhere else, you know what i mean) Whether it’s because you didn’t put yourself in the right position, choose the right lens, the right exposure or any of the other familiar obstacles and rookie mistakes

Whatever the reason, you miss it. And almost instantly you know, sometimes a few seconds after or even as the moment is still happening, that that moment was the picture. It’s not even a thought; it’s a sinking feeling in the pit of your stomach. Obviously, you don’t just give up and walk away. You keep shooting the assignment and try your best for as long as you can. Maybe at the end you still come away with something that you’re proud of, and sometimes you don’t. either way, you think of that picture you didn’t get. Sometimes it bothers you more than you know it should and you beat yourself up about it, because when you pour so much of your energy, so much of your heart and soul into something, that “something” for better or worse becomes a part of you; how you see yourself, who you are. When that happens it’s hard to separate yourself from what you might look at as a failed assignment; to not fall into the trap of feeling like you are a failure because of it.

When that happens its important to remember that this whole thing is a marathon and not a race, that the missed moment can be a lesson learned so you won’t miss a more important one later, and that even the best of the best make mistakes too.

With that in mind, I thought I would share a couple of my more memorable experiences of not getting the shot; the could have been’s and never were’s. These aren’t good pictures, and that’s kind of the point.

My immediate favorite when it comes to my screw ups, I was able to get a pass to cover Obama’s second inaugural parade. I got to the place relatively early, and was tipped off by an AP guy on the press riser that Obama would be getting out of the beast somewhere around 9th and Pennsylvania and walk for a couple blocks before getting back into it. I walked over to the space and saw a bench with no one on it. All I had to do was go sit on it and wait for awhile. But no, I didn’t feel like doing that. I went to get some food. By the time I got back it was a solid wall of people, and the bench, totally full. So as the Obama’s got out where the guy said they would, I had to hail mary it with an 80-200mm from the 90’s that already wasn’t good at focusing even when I was looking through the viewfinder. The results were predictable. I got nothing. I was so angry I left immediately and didn’t talk to anyone for a good 24 hours. It doesn’t bother me at all now; thousands of photos of the Obama’s were taken that day, but at the time it meant a lot to me.

Ever since this assignment iv’e done my best to get to places early (just assignments, i’m still working on that in my personal life) I was assigned to photograph a young pastor who was taking a leadership position in a very old and traditional church in DC. I got to the assignment right on time; and too late. Just as I was walking up I saw him greeting and hugging the last few people at the front door. I felt it right then and there that that was the photo I needed and that everything else I took would just be secondary. As much as i tried to make interesting pictures in the basement while he gave his sermon, my pictures (if I’m being generous) were just ok. I didn’t get another call from the Metro desk for a year.

I cringe every time I open the folder of this shoot. It’s so awful. This was my first portrait assignment for the SF Chronicle during my internship there, and I knew next to nothing about portraits. I had a lighting kit given to me, but I had no idea how to really use it. I was assigned to photograph a ballerina who had come all the way from France to perform/study in San Francisco. I was told I’d be shooting her while she practiced and to try and get a portrait of her as well. But there was a mixup with the timing and I actually got to the building as she was finishing practice. So I found myself desperately trying to look like I knew what I was doing shooting with no lights in the blaring afternoon sun. I was grasping for straws to the point that I told her to lay on the bush, because the bushes and design of the bars reminded me of Versailles and I figured that was reasonable enough. Considering how inept I was, she was incredibly gracious with her time and attitude. I walked back to the Chronicle and showed my miserable photos to Russell the photo editor, who asked me if I thought the photos were beautiful. When I said no he handed me back my laptop and said “well that’s what you have to do next time” before walking away.

This was back when the Occupy Movement was happening. The campers had just put up the “occubarn” in the early morning.

It’s not that good a picture, but I remember this being the first photo i took that really pissed me off when the officer just walked into the frame at the perfect time to mess it up.  Speaking of being in the frame.

Well it’s almost 4am here, and I know I have plenty of missed photos in my albums at work, so i’ll probably add more tomorrow when i can look through them.